A interview with Richard Harlow was published in the Harlowton Times in June of 1949. Parts of the interview, in narrative form, are reprinted here with the permission of the Times. The full interview can be found in Bill Wilkerson’s book: Montana Railroad Company; The Jawbone Railroad. Bill’s book can be purchased from the museum’s online shop or from its publisher; The Times Clarion, Harlowton, Montana.

Harlow wanted to build a railroad that connected the smelter at East Helena with the silver mines in the Castle Mountains east of White Sulphur Springs. Harlow first planned to build a railroad from Helena directly east to Canyon Ferry, over White’s Pass, thence on to White Sulphur Springs and to Castle Town beyond. This railroad, while planned and surveyed, never laid a rail. The Northern Pacific subsequently contacted Harlow about building from Lombard (east of Toston) into Castle, saving considerable miles of track.

Harlow – “In the summer of 1890, in the midst of the excitement (over silver finds in the Castle Mountains and elsewhere in Montana) an eastern friend dropped into my office unexpectedly and told me that he had some money to invest and it was not long before I told him that I had a place to put it and thus a railroad was born.

“Time passed and every plan we made went awry, but my friend had nerve and faith and some money and that, with the work I could do, enabled us to finally begin work on May 1895, on the Sixteen mile division. Work began near the present site of Deer Park.

“The Cumberland Mine (near Castle) had a small smelter in which it had reduced 6,000 tons of silver lead bullion. The coke for the smelter was hauled in wagons from Livingston.

“The ore was of too low grade, however, to justify the long haul to the Northern Pacific and a cry arose from the two thousand men who got their mail at Castle for a railroad.

“Helena was wide awake and heard the call and its citizens met and offered a bonus of $200,000.00 in land and cash to anyone who would build a railroad from that city to Castle.

“Before we got underway, the Panic of 1893 overtook us and the Helena bonus went glimmering. Not a penny of it was ever paid to us in any form.

“It was these financial arrangements that really built the road. The first was with contractors who built the grade and who under their contract agreed to accept notes of the company, secured by bonds in lieu of cash. The second contract I had was with the Cumberland Mining Company in which that company agreed to exchange 7,000 tons of ore that was lying in its dump for our railroad bonds. The third agreement was with the East Helena Smelting Company agreed to pay us $150,000.00 in cash for the 7,000 tons of ore when we delivered the same to at their smelter. The fourth agreement was with the Pacific Railroad Company in which that the Company agreed to sell us rails, spikes and fittings, locomotive and rolling stock and accept our notes secured by bonds in payment therefore… .

“The work began in earnest and I thought our troubles were over, but I then had the experience of the average man who buys an automobile; I found that my troubles had only fairly begun.

“When we reached Martinsdale, Mr. Whitney (the eastern investor) threw up his hands and Henry D. Moore of … New Jersey came into the enterprise… . (h)e made it possible for me to make another contract with the Northern Pacific by which that company conditionally guaranteed our bonds, which contract enabled me to build the extension (to Merino – later Harlowton). The advance to Harlowton really put real life blood into the road.

“One day after we had finished out first section I got a telegram from a Northern Pacific official telling me that his company was about to issue a new folder and wanted to put our train time table on it. He wanted the names of the towns and their distances from Lombard. At that time there were no towns on the line nor was there any provocation for one, but that afternoon, I drew up the schedule and located towns and plenty of them, and strange to say a good many of them are on the map today.” 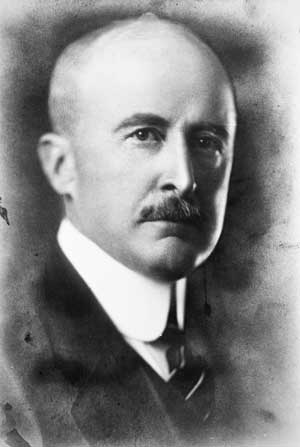 Your Support Enables Us To Grow!

Become a Member or Donate Today!